On Tuesday, September 26th, grades 4-6 visited Stamford’s Arboretum for their annual Tashlich and Tefilla, performing the symbolic act of casting away bad deeds from the previous year. Tashlich comes from the Hebrew word meaning “to cast,” referring to the intent to cast away our sins via this meaningful and ancient Jewish custom common. Photos by Esther G. 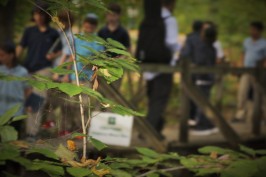